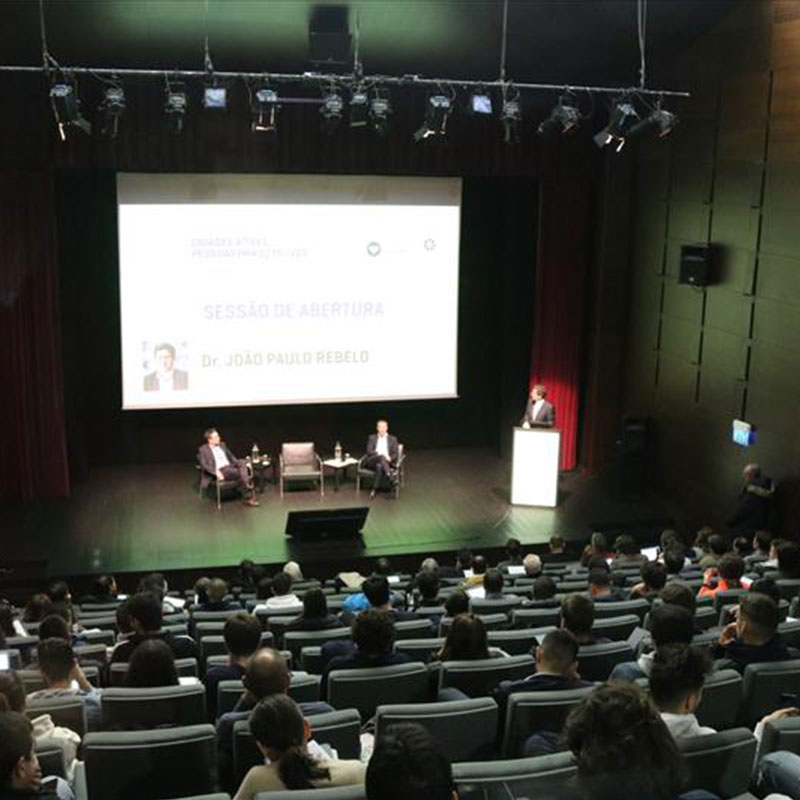 European specialists participated in Guimarães in the International Seminar “Active Cities, (happier) people”, which took place on November 20, 2019, at the Centro Cultural Vila Flor (CCVF), and was attended by the Secretary of State for Youth and Sports, João Paulo Rebelo.

Organized by the Municipality of Guimarães and the Tempo Livre, the seminar program included four panels dedicated to the themes “Active Cities - a global project for active cities”, “Cycling cities”, “Transforming cities into Active Cities: a European perspective” and social responsibility projects in football clubs subordinated to the topic “More than a sports club”.

The reflection on active cities, the exchange of experiences and the sharing of good practices resulting from successful projects and successfully implemented in Europe, included participation by the Guimarães City Council, Tempo Livre, Universidade do Minho and Vitória Sport Clube, joined by speakers from the United Kingdom (Liverpool Active City, Everton FC and Bikeability Trust) and France (PACTE Project).

João Paulo Rebelo, Secretary of State for Youth and Sports, praised the nature of Guimarães as a Sport-Friendly Municipality at the opening ceremony and congratulated the work carried out in favor of a strategy to promote physical activity, while announcing the objective to place Portugal, within a decade, among the group of the 15 most active countries.

The councilor for Sport in the municipality of Guimarães, defended the need to articulate sustainability, mobility and physical activity, making cities evolve towards more balanced and attractive territories.

In the first panel of the Seminar, on themes “Active Cities - a global project for active cities”, Christopher Price (Liverpool Active City) explained that the starting point for the physical activity promotion plan launched in Liverpool in 2005 was a location with half a million inhabitants, and a territory marked by imbalances, inactivity and impoverishment, with specific focuses of antisocial behavior. After 14 years, although positive, the results are insufficient to satisfy the local ambition for a paradigm shift that involves achieving the goal of making Liverpool the most active city in the United Kingdom.

Seara de Sá, councilor for urbanism at the Guimarães City Council, addressed the theme of cycling cities from the perspective of urbanism and the planning of cities that are more friendly to sports, physical activity and well-being. The mayor explained Ecovia's Guimarães program (to be developed in three phases), the Urban Mobility Plan and the tactical sense of the strategy: familiarizing citizens with the bicycle and introducing new mobility concepts, with priority for pedestrians and bicycles.

Paulo Ribeiro, from the Department of Civil Engineering at the University of Minho, defended “the city” as a living organism and a territory where resilient and integrated mobility measures must be implemented to combat, among others, low levels of cycling use. Pointing sustainability as one of the challenges of the present, Paulo Ribeiro argued that, together with the issue of inactivity and sedentary lifestyle, transforming cities into smart and sustainable urban ecosystems, associating strategies and interventions with the theme of climate emergence, will assume a relevant role in political agenda.

Providing English children with training on the safe use of bicycles as a means of transport, entertainment, leisure and sport, was the project that Paul Robison (Bikeability Trust - UK) presented in the second panel of the International Seminar. “Bikeability” is a project financed by the Government and has already provided training to 3 million children.

In the panel on Active Cities, Maxime Leblanc (PACTE Project, Sport & Citizenship) presented the PACTE think tank that involves a European network of partners, among which the Tempo Livre and Guimarães City Hall. PACTE's work has been developed to provide policy makers with scientifically validated and useful information for decision-making. In addition to studies and surveys carried out over 10 years of activity, PACTE offers a sociological reading of sports policies and the promotion of physical activity.

Amadeu Portilha, President of Tempo Livre, explained the strategy to promote physical activity, health and well-being in Guimarães, stressing that it has been in development for 20 years, precisely, through the work of Tempo Livre which, anticipating the agenda of combating physical inactivity and physical inactivity, has carried out practical work to implement and promote sport for all, and physical activity involving different audiences and target groups.

Currently, in addition to a series of activities, programs and services, the Tempo Livre develops a work of monitoring, evaluation and research around sport and physical activity, working in collaboration with universities and higher education institutes, in a multidisciplinary and transversal perspective that includes the study and research in different scientific areas from sport and management, passing by medicine, psychology, sociology and economics, among others. In addition Tempo Livre is working on a guiding document with a view to presenting the Municipal Plan for the Promotion of Physical Activity.

More than a sports club

In the final session of the International Seminar (“More than a sports club”), two social responsibility projects developed in football clubs were presented. Pedro Coelho Lima (Vitória Sport Clube) highlighted the identity aspect and the representative strength of Vitória Sport Clube for the city, the municipality and the country, highlighting that the club's social responsibility project intends to assert itself as a model and example to to be followed by supporters and partners, involving fields such as environmental sustainability, social causes, solidarity, integrated in a sports project that, more than competition, aims to assert itself as a training school, athletes and, above all, citizens.

The director of the Adapted Sports Department at Everton FC, Steve Johnson, presented the project Everton in the Community (EITC), an initiative of a social nature whose intervention involves, in addition to the club's management and membership, hundreds of volunteers. The main objectives of the EITC are to combat inequality in sport, to promote physical activity for all and to enable people with disabilities to practice sports, with the work being developed in partnership and collaboration with schools, hospitals and social support centers.

The International Seminar Active Cities, Happy People (more) was attended by a hundred and a half participants, mostly municipal technicians in the areas of urbanism, planning and sport, students in technical, secondary and higher education in sport and sports management and researchers associated with the universities of Minho and Porto, ISMAI and IESF.

Tempo Livre © 2023. All Rights Reserved. created by design me