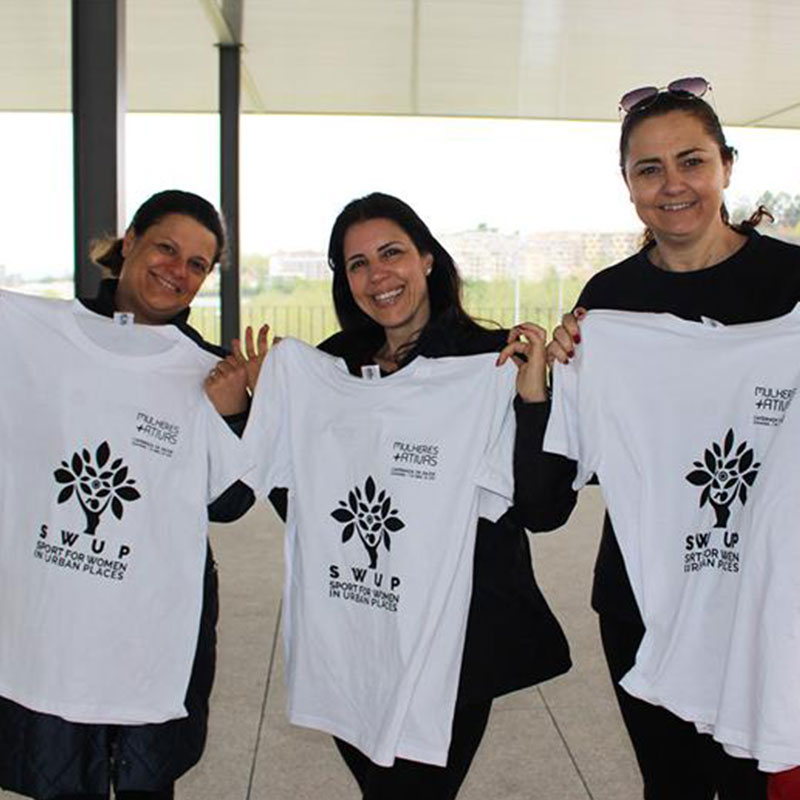 A Tempo Livre and the Guimarães City Council will present the conclusions of the activities promoted within the scope of Sport For Women in Urban Places (SW-UP) next week, in Brussels, which aims to promote female participation in sport and physical activity.

The SW-UP, based on scientific research, included conducting surveys, surveys, sharing experiences and good practices with a view to presenting a final document that gathers recommendations that intend to contribute to stimulate physical activity and female participation, raising awareness sedentary women, in particular, and the community in general, for the health benefits of this regular physical activity.

Over 18 months, several initiatives were developed in Guimarães, such as the “Women + Active” program, which included lectures, outdoor physical activities, a walk, health screening and medical advice. Transnational meetings and working meetings were also held with local partner entities to prepare recommendations, collect testimonials, participate in surveys and answer questionnaires.

The SW-UP project's mission is part of European policies to encourage female participation in sport and physical activity, and pays particular attention to the barriers that women face, particularly in urban environments, and with a view to making them more accessible, safe and friendly to sports.

Majority of women are inactive

In a survey coordinated scientifically by the Mulier Institut (Utrecht, Netherlands), it was concluded that 58% of women (who responded to the survey in Guimarães), between 36 and 55 years of age, are inactive and pointed out as the main reasons for their physical inactivity the difficulty of reconciling personal, professional and family time, disliking physical activity / sport and not having company (to practice physical exercise or outdoor sport). In addition, not having company to practice physical activity outdoors, a certain perception of insecurity (especially among younger women and over 65 years old) and the fact of never having practiced physical activity or outdoor sport were identified as barriers the activity.

Nevertheless, the study points to maintaining or improving the quality of health and physical condition and relaxation as elements of motivation to be active, with the women of Guimarães paying particular attention to the safety of outdoor spaces (leisure parks, gardens, multi-sports), good maintenance of parks and proximity to home or work place as necessary conditions for sports.

The improvement of public transport networks, more and better information to raise awareness of the benefits that regular physical activity reflects on health and well-being, the implementation of programs to promote physical activity targeted at specific groups (pregnant women, cancer patients, diabetics , seniors, people with physical disabilities resulting from illness, accident or natural causes, among others), were some of the situations identified in the work developed by Tempo Livre and Guimarães City Hall.

With family, security, time reconciliation and outdoor activities / events as vectors, the pilot program (Women + Active) by Guimarães in the context of the SW-UP materialized the recommendations put forward by the survey respondents suggesting the promotion of physical activity programs for everyone in the county's leisure parks, activities aimed at families, especially for women with young children, more diversity of proposals and initiatives, workplace gymnastics, more and better information and communication in leisure parks and reinforcement of the bet in outdoor activities.

“Mulheres + Ativas” was part of a cycle of four workshops (held at Casa da Memória and dealing with the themes “Mulheres + Ativas” and chronic diseases, in senior age, in adolescence and youth and in pregnancy) and Gymnastics in the Park (in the parks of Cidade, Ínsua, Lordelo and Cidade Desportiva), ending with a Health Walk in which the advantages of physical exercise were reinforced, mobilizing some of the county's active forces for walking.

Throughout the project it was found that the most sedentary people increased their levels of physical activity and assumed the intention to change their attitude and intensify their regular physical activity. Even so, it was the women who practiced the most and attended the gym sessions in the park and were present on the walk.
The success of the “Women + Active” program is also evidenced by the fact that more than 80% of the participants support the continuity of the initiative, highlighting the lectures (life experiences) and the Walk as the most relevant aspects.

Among the most frequent motivations presented as justification for participating in the pilot program, participants indicated their personal interest in outdoor sport / physical activity, the possibility of practicing physical activity outdoors with other people and the type of program and actions proposed.

The program “Mulheres + Ativas” had as local partners the Mais Guimarães newspaper and the Hospital da Luz, also counting on the collaboration of a group of local entities that joined the project (Cercigui, APCG, Municipal Forum of People with Disabilities, Casa da Memory, GTEAM, Guimagym, Vitória Sport Clube, Fraterna, Sol do Ave and EIM).

The Sport For Women in Urban Places (SW-UP) project is co-financed by the European Union's Erasmus + program, and has the Guimarães City Hall and the Tempo Livre as partner entities representing Portugal.

“We cannot stop or we die earlier. Physical activity is necessary until the last breath.> ”
Francisco, 67 years

"Physical activity is halfway to health and to feel good!"
Manuela, 53 years

"Physical activity is not only beneficial for the body, it is also for the mind."
Margarida, 64 years

"I have always practiced sport and my stress levels have always been lower than those of my colleagues, I feel that I am more willing to study."
Alexandra, 20 years

COMMENTS FROM DOCTORS, NURSES AND HEALTH TECHNICIANS INVOLVED IN THE PROJECT:

“This type of activity is very important to increase people's awareness of the benefits of sports and regular exercise. The effort for a healthy life is never too much. ”
João da Silva (Physiotherapist, HLG)

“Participating in the Workshop“ Women + Active in adolescence and youth ”was very rewarding as a health professional and as a woman. Actions like this are important to promote healthy lifestyles. It would be an asset if the Women + Active Action continued in the city of Guimarães through other training and health education programs. ”
Dra. Liliana Macedo (Pediatrician, HLG)

“The Most Active Women project, brings the general population and women in particular closer to physical activity. Contributing to motivate, clarify, demystifying the relationship between the disease and physical exercise. ”
Lídia Toscano (Nurse Specialist in Oncology, HLG)

“Bringing medical services closer to people is always worthwhile, as I think it will be everything that can contribute to bringing people together and improving the doctor-patient relationship in general. In the case of “Mulheres + Ativas” in the Senior Age, it seemed to me an interesting model - to put people of different origins, with very different perspectives talking like a “brain storm”. It was an interesting and enriching challenge. ”
Dr. Jorge Gomes da Silva (Internist, HLG)

Tempo Livre © 2022. All Rights Reserved. created by design me