Tempo Livre represented in the FLOT 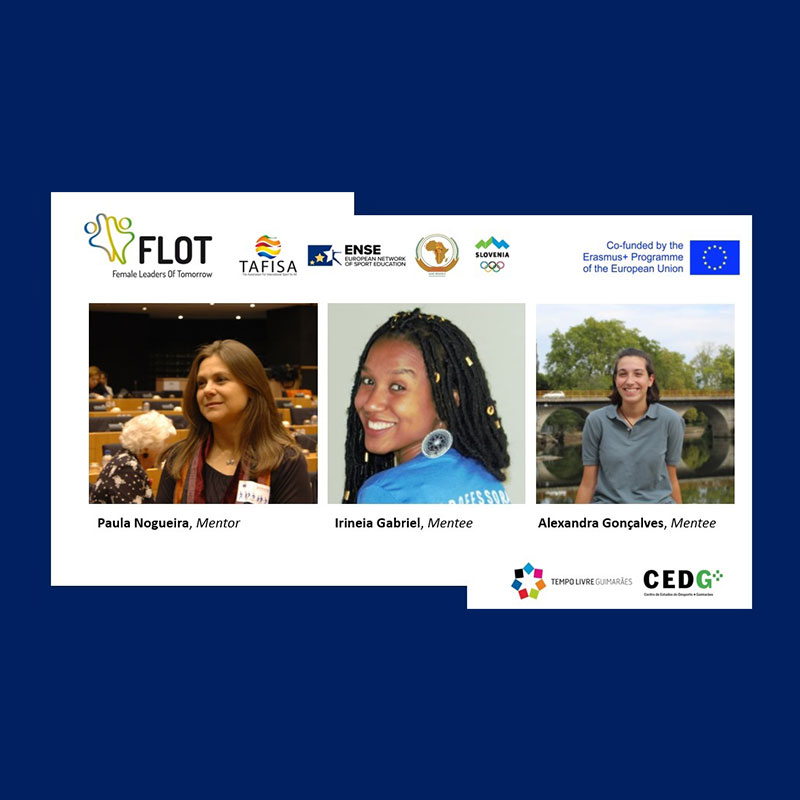 The Director of the Sport Studies Center of Guimarães (work unit in the area of ​​research and training created in 2018 by Tempo Livre), Paula Nogueira and Alexandra Gonçalves (futsal athlete at GTeam and Nursing student) are the Portuguese present in the FLOT - Female Leaders of Tomorrow project, an initiative of TAFISA - The Association for International Sport for All co-financed by the European Commission. Another young athlete, sports and university leader, Irineia Gabriel (from Luanda), represents Angola in the working group.

FLOT is a project co-financed by the European Commission that aims to train a new generation of young European and African women who currently work (or are volunteers) in Sport for All, and provide them with the tools, knowledge, experiences and guidance needed to lead this global movement that, among other scourges, combats inactivity and inactivity.

Through a comprehensive international mobility and mentoring program, young candidates for future leaders of the global Sport for All movement will be guided by a group of mentors with a view to their training for leadership.

The 11 mentors, from seven countries in Africa and Europe (South Africa, Zimbabwe, Zambia, Germany, Slovenia, Portugal and France), were selected based on their vast knowledge, experience and successes achieved with activities, projects and initiatives that are part of the spirit of the global Sport for All movement.

Each mentor is responsible for the personalized guidance of two young women, one African, the other European, and within the scope of the FLOT project, each of the 9 mentoring trios will develop innovative projects with practical application. The 20 young people selected are from nine African countries (Namibia, Angola, Botswana, Essuatini, Malawi, South Africa, Zimbabwe, Zambia, Lesotho) and four European countries (Slovenia, Portugal, United Kingdom and Germany).

Individual projects will have to address one of the 12 topics of the TAFISA 2030 Mission: For a better world through Sport for All, a guiding document for a global strategy to combat the worldwide epidemic of physical inactivity and which calls for the mobilization of all to , with your example and intervention, be part of the movement for change for a better world. Peace, development and partnerships, gender equity, education, social inclusion, exercise and sport literacy, active cities, environment, cultural heritage and diversity, governance, leadership and integrity, community and volunteering, health and well-being, impact economic and volunteering, are the topics that make up the Tafisa 2030 Mission.

Participants will have the opportunity to develop personal, professional and technical skills, acquire new skills and knowledge through non-formal education, as well as enhance their future employability.

The presentation sessions took place in August and the first working meetings took place during the month of September. The individual projects were presented at the end of February and their application started in March. The disclosure of the projects, after execution, is expected to take place during the 27th World Congress of TAFISA, which will be held in Portorož, Slovenia, in the autumn.

The FLOT project is developed by TAFISA - The Association for International Sport for All, which is joined by other partners such as the Association of Sports Federations (OCS-ASF), the European Sports Education Network (ENSE), the Slovenian Olympic Committee and the African Union Sport Council Region 5 (AUSC Region 5).

Paula R. Nogueira - Mentor - She is currently Director of the Sport Studies Center of Guimarães and responsible for the Research & Innovation unit, at Tempo Livre. He coordinates, among others, studies on the socio-sporting reality of the municipality of Guimarães, training and qualification actions for managers, coaches and other sports agents.

She holds a PhD in History of Science and Scientific Education (Center of Physics, University of Coimbra), Master in Communication Sciences (Institute of Social Sciences, University of Minho) and a Degree in Social Communication (Institute of Social Sciences, University of Minho). It has represented the Tempo Livre in several European projects co-financed by the European Commission. It focuses its intervention on activities aimed at raising women's awareness of the benefits of physical activity and combating gender-based violence and harassment (including in sport). She was general coordinator and member of the Executive Committee of the European City of Sport - Guimarães 2013 and Director of Facilities (Multiusos de Guimarães) between 2010 and 2017.

Alexandra Gonçalves (Xana) - Mentee - Futsal player at the club GTeam (Guimarães) is a nursing student (University of Trás os Montes and Alto Douro). Passionate about sport, football and futsal in particular, she never gave up practicing the sport and in the absence of women's teams she did not hesitate to play with boys.

Although very young (20 years old) he has extensive life experience. Her dynamism and resilience contributed to highlight her leadership characteristics, which opened the opportunity for her to become a futsal coach in the younger strata.

Alongside sport, she develops relevant civic activity: she is a volunteer at the Portuguese Red Cross, she collaborates in the campaigns of the Food Bank against Hunger, and she participates as a volunteer in projects of social dynamism with the elderly such as the “Encontro de Saberes”, or in the collection funds to support people in situations of fragility or risk.

Irineia Gabriel -Mentee– He has stood out as a sports activist and chess practitioner. She is Captain of the National Selection of the Olympics (Angola) and national specialist. Teaches chess and streamlines programs and activities aimed at mass sporting among the most disadvantaged communities.

With a degree in Telecommunications Engineering, she attends the Master's Degree in Management of Communications Networks and Systems (Catholic University of Angola), studied, between 2007 and 2011, Average Technician of Education in the Mathematics and Physics Course, also in Angola.

In the scope of his academic and professional activity, he stands out for his management skills and the dynamics he applies to his projects. At the Catholic University of Angola, she is DTIC Coordinator in the PeopleSoft Oracle IT Management System area and a professor at the Faculty of Engineering, also working at the Technical Training and Technology Institute (ITTT) as Deputy Director and professor of ICTs.